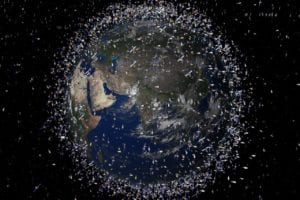 We are proud of our heritage to go the Moon and to send satellites into Earth orbit. Humanity is depending on space objects, for Navigation with Global Navigation Satellite Systems like GPS, Glonass, Galileo or Beidou, weather satellites and Earth observation satellites. Space became a critical infrastructure for our daily life. Not to forget the Human outpost in space, the International Space Station ISS.

The international law that is used and ratified by all nations with space programs is the Outer Space Treaty from 1967. (see here https://www.unoosa.org/oosa/en/ourwork/spacelaw/treaties/introouterspacetreaty.html ) It states in article 6 that nation have to supervise and monitor their actions in space.

„I would start off by just loosely defining SSA as the knowledge required to make decisions in space. And that in itself is very subjective, because different people make different types of decisions. Therefore, I think one of the major issues is a lack of standardisation in these types of decisions and a lack of agreement on what those sorts of decisions would be. This is because everybody has their own subjective criteria. We don’t have a lingua franca when it comes to SSA.
The second issue, I feel, is that people are not aware of the ramifications of the information they might provide. Somebody might want to be very forthcoming, but there’s a lot of paranoia that revealing too much might negatively impact their business model, which might also impact upon their ability to behave the way they want to behave in space without everybody knowing every detail of their thought process.
It comes back to this idea of making things 100% predictable in space. Even though people would like that from a safety perspective, they don’t want that from an “concept of operations” perspective. The question is, how do you get one without the other and people still don’t know how to bridge that gap.
So, there is a lack of a standardisation in the types of decisions that need to be made, a lack of a lingua franca. Then there is this unknown element of wanting to be safe but at the same time not wanting to reveal all business plans to others that might provide them with the ability to predict every move with regards to “concept of operations” in other words, proprietary or “competitive” information. The medical community has gotten around many of these issues with protecting client anonymity whilst being able to do meaningful data science. We need to look at that model, in my opinion.“ Prof. Jah responded.

The other level of the challenge is the legal framework.

Asking Prof. Dr. Kai-Uwe Schrogl, President of the International Institute for Space Law (IISL): Where do we stand in this process on global level?

„We already have an agenda item in the Legal Subcommittee of the United Nations Committee on the Peaceful Uses of Outer Space. It was established at my time when I chaired the Legal Subcommittee. So I’m glad that I was able to bring that to live on the international governmental agenda. This offers a global forum where an exchange on practices can be executed, but, in future, drafting regulations on global standards may follow.“ Prof Schrogl replied.

„We should note that there are two possible approaches to space traffic management. One is the bottom-up approach, identifying a number of specific areas that constitute best practices like collision avoidance rules etc. The other approach is the top down approach, where a complete new set of coherent and comprehensive regulations is to be developed.  In a follow-up study to our IAA 2006 report, we presented in 2018 ideas which encourage the examination of existing International Air Law and International Telecommunications Law, which could serve as an example for setting up a regulatory architecture for space traffic management.

On the other hand, it can also be efficient to work bottom-up, capturing what is available in various areas as quick as possible. The disadvantage, however, is that it might not be as coherent as a top down approach. So, we are now looking at the merits of the various approaches in order to identify best way forward. We should not underestimate diplomatic efforts. The US have a fairly clear view on what space traffic management could be or should be, based on a policy directive from their Space Council. In other countries only conceptual ideas exist and I can already confirm that Europe is also interested in that field and the German EU Council Presidency will to initiate debates and develop European positions for space traffic management in 2020.“

„The situation is, however, not entirely bleak. Programmes such as the EU Space Surveillance and Tracking (EU SST) Framework provide an example of international civil cooperation adding value to US military support for sustainable space operations. Whilst there is undoubtedly room to develop this, it represents an encouraging start. The initial years of the framework has built upon existing capabilities and in some cases, like the US Space Surveillance Network, repurposed systems designed for ‘other’ tasks in order to support space surveillance.“

Human race realized that we have a growing issue in space. We risk our entire life as we know it, if things continue to develop the massive deployment of objects in space, uncoordinated and unregulated. Only together humanity has a chance to solve that issue! No -one can do that alone. We need a global Space Traffic Management!