SPOT satellite devices were used to initiate 29 emergency rescues in Europe in 2019 so far, including nine in the UK and eight in France. The remainder were in Norway, Italy, Austria, Spain, Sweden, Greece and Portugal. Hiking and mountain sports were most represented in 2019 – 13 rescues in total – while six rescues were initiated by users taking part in aviation, including paragliding. The average time between S.O.S. initiation and call log close for the 29 rescues was just 2hrs 22min, despite the extreme locations and conditions of most rescues.

SPOT provides affordable satellite communications and S.O.S. notification for the avid adventurer and the remote or solo worker wherever they travel, including locations with unreliable or non-existent mobile coverage, and is trusted by hundreds of thousands of users all over the world.

As the newest member of the SPOT family of devices, SPOT X with Bluetooth wireless technology offers two-way SMS and email messaging as well as GPS tracking and a one-touch S.O.S. button that instantly sends the user’s GPS location to the GEOS International Emergency Response Coordination Centre (IERCC) over the Globalstar satellite network. The IERCC then transmits details to local first responders to dispatch help to the user’s precise location. SPOT has played a role in more than 6,900 rescues around the globe, many of which were life-saving.

Users can message directly from the SPOT X device or use the new SPOT X app that also features unlimited use of 14 pre-programmed messages and access to the contacts on a user’s smartphone, making it easy to communicate with family, friends, colleagues or directly with first responders in an emergency. 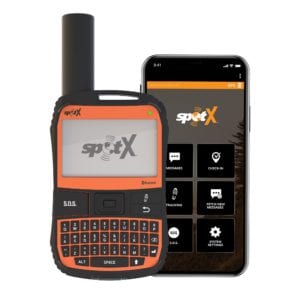 SPOT X is the only satellite messenger on the market to give users a permanent phone number, free incoming messages, easy check-in function and a full, backlit QWERTY keypad for intuitive typing. SPOT X also offers the industry’s longest battery life in both tracking and S.O.S. modes and is priced competitively.

“The vast majority of our current customers already take their mobile phones on their adventures,” said David Kagan, CEO at Globalstar. “Adding Bluetooth capability to SPOT X allows users to seamlessly connect their smartphone and use an intuitive interface to send and receive messages over the Globalstar satellite network. SPOT X operates for up to 10 days on a single charge, with or without a paired phone.”

Panorama Diffusion is an Italy-based distributor of mountain and bike products, including SPOT. Gunther Acherer, Managing Director at Panorama Diffusion, said: “The SPOT family of products is popular among users involved in many outdoor activities but the vast majority of our customers go walking, climbing and mountain biking in the Alps. The Bluetooth version of SPOT X is certain to be a hit with those many adventurers who prefer to use an app on their phone to send and receive satellite messages.”

SPOT X with Bluetooth is available at RRP of €299 + VAT (£256 + VAT) with both month-to-month flexible, seasonal plans and annual service plans starting at €11.95 (£9.27) per month. Globalstar and its worldwide distribution network frequently offer special promotions for SPOT products and services. In Europe, there is currently an offer of 50% off the first year of service through 6 January 2020.

Register Today For Our Space Café Italy On 1 June 2022