Thaicom Public Company Limited (THCOM), Thailand’s first satellite operator, reported its operating results for the third quarter of 2018, posting a consolidated net profit of Baht 104 million (approximately U.S.$3.15 million), improved by 59.6% from Q3/2017, due mainly to the decrease of depreciation expense through the satellite assets impairment recognized in Q4/2017, and the decrease of selling and administration expenses.

The consolidated revenue from sales of goods and rendering of services increased by 0.6% from Q2/2018, contributed mainly by the ramp up of satellite revenue from oversea clients. However, compared to the previous quarter, the net profit was down by 58.6%, caused mainly by the recognition of net foreign exchange loss of Baht 36 million (approximately U.S.$1.09 million) in Q3/2018 as a result of Baht appreciation in Q3/2018, together with the decrease of the share of profit from LTC due to the drop of telephone usage according to the disaster from a dam collapse in Laos.

During the third quarter of 2018, the company signed a multi-year consultancy service agreement with Bangladesh Communication Satellite Company Limited (BCSCL), a Bangladesh Government-owned satellite operator in order to develop the Bangabandhu Satellite-1 programme and future markets.

Thaicom also signed a lucrative deal with Uniwise Offshore Limited, one of Asia’s leading offshore support vessel (OSV) operators, who selected Nava™ to enhance operations on their entire fleet of more than 30 vessels. 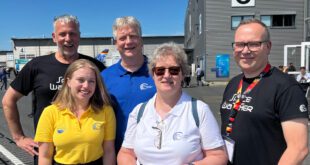