SpaceWatch.Global is providing a new weekly feature that provides a brief summary and roundup of space activities and satellite industry developments in Africa, Middle East, Asia-Pacific, and Russia and the CIS that have not been reported in-depth by our team.

This past week in the Middle East, the following occurred:

Spacecom announced on 8 March 2018 that it has entered into a long-term agreement with the UK’s Cobbett Hill Earth Station for the provision of C-band capacity via its AMOS-17 communications satellite expected to be launched in 2019. Cobbett Hill Earth Station will use the AMOS-17 C-band capacity to provide High-Throughput Internet, voice, data, and broadcasting services to the expanding sub-Saharan African market once the satellite is operational.

Gilat announced on 8 March 2018 that its SkyEdge IIc Very Small Aperture Terminal (VSAT) platform has been selected to provide satellite backhaul for Altice Portugal, a telecommunications and media company headquartered in Lisbon. On 12 March 2018, Gilat announced the launch of its AeroEdge 6000 terminal for inflight connectivity. The AeroEdge 6000 includes Ka- and Ku-band antennas, MODMAN, and Wavestream transceivers, and the official product launch took place at the Satellite 2018 show in Washington, DC. Lastly, on 20 March 2018 Gilat posted its annual financial report for 2017 with the U.S. Securities and Exchange Commission, and a copy of the report is expected to be available on the Gilat website soon.

According to several media outlets, Abu Dhabi-based Yahsat is expected to file an insurance claim for U.S.$108 million after alleging it has lost 43% of its operating capacity on board its Al Yah-3 communications satellite following a flawed launch by Arianespace in late January 2018.

U.S. company Comtech Systems, a subsidiary of Comtech Telecommunications Corporation, announced on 20 March 2018 that it had won a U.S.$2 million contract from a supplier to the UAE Armed Forces to provide them with 50 Mb/second tactical troposcatter equipment. Troposcatter is a method of communicating with microwave radio signals over considerable distances – often up to 300 kilometres (190 miles), depending on terrain and climate.

The UAE Embassy in Washington, DC, hosted a reception with over 400 attendees on the sidelines of the Satellite 2018 show earlier in March. The reception was attended by Dr. Mohamed Aljunaibi, Executive Director of Space Sector at the UAE Space Agency; Eng. Salem Humaid Al Marri, Assistant Director General for Scientific and Technical Affairs at the Mohammed bin Rashid Space Centre (MBRSC); Ahmed Ali Al Shamsi, Acting Chief Executive Officer and Chief Technology Officer of Thuraya Telecommunications Company (Thuraya); and Ali Al Hashemi, General Manager of YahService, the managed services business entity of the Al Yah Satellite Communications Company (Yahsat). In his remarks, Dr. Aljunaibi told guests of the importance of UAE-U.S. cooperation in space, saying that, “The United States and the UAE enjoy a vibrant and expanding bilateral relationship in the fields of space. In June 2016, NASA and the UAE Space Agency signed a strategic cooperation agreement on aeronautics research and outer space exploration working together in the peaceful use of outer space for the benefit of humanity.”

Share
Previous 2018 to be Active Year for Pakistani Space, With Chinese Help
Next Saudi Arabia Rumoured to Be Funding Ukrainian Hypersonic Spaceplane 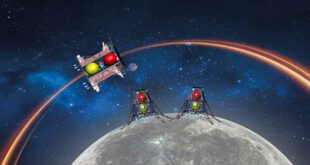