Airbus Defence and Space has announced the kick-off of EDRS-D, the third communication node of the SpaceDataHighway. Airbus Defence and Space will expand the EDRS-SpaceDataHighway with a third node, EDRS-D, to be positioned over the Asia-Pacific region by 2020. This third node will be the next step towards global optical fibre in the sky and will support the Pacific Rim region, which has witnessed its communication needs for airborne missions rise dramatically.

EDRS-D will include several major innovations to be developed in partnership with ESA. Following the ESA Ministerial Council in December 2016, critical activities dedicated to laser communication in space are being initiated. 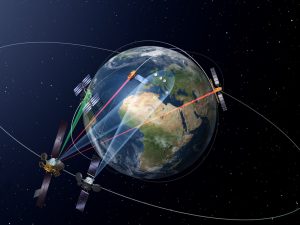 EDRS-D will be equipped with multiple laser communication terminals performing optical bi-directional links in order to serve a number of satellites, drones and aircraft simultaneously. It will also be able to establish a laser communication link with another geostationary relay satellite of the SpaceDataHighway, in order to relay data to the other side of the globe, while being at the cutting-edge of security standards.

The SpaceDataHighway service will enable rapid near-real time tasking and high bandwidth data download ensuring highest reactivity, lowest latency and high volume data transfer for Earth observation satellite and airborne platforms. This represents a step change in the speed of space communications. Ultra-broadband laser communications and the geostationary orbit of the relay satellites combine to deliver a unique, secure, near real time data transfer service, making data latency a thing of the past.

Thanks to laser technology the SpaceDataHighway can transfer high-volume data from Earth observation satellites and airborne platforms, at a data rate of 1.8 Gbps and can transmit up to 40 terabytes per day in quasi real time. The European Union’s Copernicus Sentinels are the first spacecraft to benefit from these next generation services.

The SpaceDataHighway programme is a result of a Public-Private Partnership (PPP) between ESA and Airbus Defence and Space. The German Space Administration DLR is also a key contributor. The innovative laser communication terminals (LCT) are developed and built by the German Airbus subsidiary Tesat Spacecom.

EDRS-A, the first relay satellite for the SpaceDataHighway programme was launched on 29 January 2016. Positioned at 9° East, this first communication node offers coverage from the American East Coast to India since its start of service in November 2016. A second satellite will be launched in 2017, which will extend the coverage, capacity and redundancy of the system.

Share
Previous The #SpaceWatchME Interviews: Laurent Lemaire and Ali Asghar of elseco – Part 2
Next GomSpace selected for the delivery of a constellation of satellites to Sky and Space Global