In the Fourth episode of Space Café Israel, Meidad Pariente is in conversation with Dr. Neta Palkovitz.

Can you share something personal that isn’t written in your LinkedIn profile?

Okay. So I’ll start with something that maybe already many people from the industry know because many times they are friends, but it’s not on my LinkedIn profile. When I’m not thinking about space, I like to be on the ground, usually with my hands on the ground touching soil, a very passionate urban gardener. I even have a Twitter account called Seeds in the city.

What is Space Law? Is there a court of space law, or is there an international legislative entity? Can you explain?

To put things in the proper context, as lawyers love doing, there is public international law, which means the law of treaties. Everything which comes between two or more nations is done in international courts. Within public international law, there are many different branches, there is maritime law, aviation law, and there is also space law. So when you say space law, usually, that would mean that branch of international law, but of course, in recent years, Space Law has developed so much that it’s no longer a creature of international law. It has become more commercial because the market has become more commercial, and we have new space. A lot of startups are doing super exciting things, and for that, I believe that international law wouldn’t be enough to regulate things properly and to give a good answer to some commercial needs. So Space Law is a branch of public international law. Still, it’s also comprised of other instruments like national laws. Corporate law also makes a difference. And on the international level, there are a lot of instruments that are not laws and they’re not treaties, they are guidelines. Now guidelines sound like a very abstract notion. What do you do with a guideline? We like to call it “soft law.” It’s not legally binding, so it’s soft. That’s the professional name for these kinds of instruments. For instance, when you talk about space debris mitigation, started with very soft instruments, just a bunch of guidelines. But you see, they do have an influence. And they do have power, although they’re very soft if you look at it from a dry perspective. So, Space Law, and that’s why it’s so fascinating to practice space law and to be in this field is comprised of many, many different types of legal “creatures.”

What tips can you share with young lawyers who want to pursue a carrier as a space lawyer?

My biggest tip and I say that in every opportunity, is if you want to become a good space lawyer, first become a lawyer. It sounds very, very obvious, but it’s not. Because many times people go out of university, and they take their “space law” specific education, but they’re not practitioners. And so that can take them only to a certain point. Dealing with theory is great, and it’s also important. Academia is important. I got a Ph.D. too. I’m also starting a postdoc soon. So it’s super important. I’m the first one to admit it, but being a practitioner is a whole different story. If you know what is in the treaty, but you’ve never seen a contract before, you never negotiated it, and you have no idea what kind of tools you have. I don’t think you’re going to do a very good job. I mean, I’m sorry to say that but that’s true. So I would say depending on which sector you really want to serve as a lawyer, dealing with commercial issues in the private space sector, or being on the side of the regulator. So, one should focus on that first, get some experience in that, and then do the space part and be a very good space lawyer.

My biggest tip is if you want to become a good space lawyer, first become a lawyer. It sounds very, very obvious, but it’s not. If you know what is in the treaty, but this is the first time you’ve seen a contract, and you never negotiated it, and you have no idea what kind of tools you have. I don’t think you will do a very good job

Let’s talk about Moon and Mars colonies. What do you foresee will be the challenges from a space law perspective? And are we expecting new jurisdiction for non-Earth settlers and newborn babies?

Well, it will take time until babies are born, I don’t know how long, depends on how optimistic you are. But in any case, things like that are already starting to be considered. From the Space Law point of view. you don’t even have a clear liability regime. First of all, you don’t have anything which regulates behaviour between two people, you have only disputes between two states. So if a person is in a facility, which is registered by the State of Israel, then technically, that facility should be under Israeli Law. like a sort of embassy. Sort of, but it also depends on the people. Because if an astronaut was sent on an official mission from the US, he or she is subject to US law. It’s a very big mishmash (chaos – m.p), at the moment in the sense that, it wasn’t tested before. The only place where we have humans living in space is the ISS, the International Space Station. For that place, there are specific agreements, there is a memorandum of understanding, and there are more agreements on how to utilize everything there. These agreements are between the state’s members of the ISS, so they’re multilateral agreements including criminal acts. But that applies only to the ISS, and only to official astronauts who go there. So even space tourists right now, or private astronauts, and for their activities, no really clear line regulates them in the sense that it does fall on agreements and these instruments at all sorts of levels. But space law, as it is, international law, doesn’t regulate any of that. So that would be the biggest issue. Which law would apply to a Mars colony? And later on, when babies are born, and their generations of people that are not from earth anymore, so theoretically, they are not even under Earth’s international law. They can succeed and say, well, we don’t belong there, we’re Martians, or I don’t know, lunar people or whatever that will be? And then, theoretically, they could have their own set of laws. But it’s so much in the future.

I’ve been back in Israel for only one year. So I have to say, I’m very happy about my timing because a lot is happening at the moment. There are so many things that are happening in the private space sector, which didn’t happen for many, many years. In 2050, I would personally like to see many good startups, really applying these innovative views and practices we already have in Israel. Also, the good business network we have here around VCs, which is not always the case in Europe. I would also love to see a few of the startups growing into some very significant space companies and not staying on the startup level. So I hope that this will be the case. Right now, everybody in Israel tells me, it will be hard to make it work, because of the export law. That’s true, export law is very important. You have to comply, no questions about that whatsoever. But if you look around the world, the US also has a pretty serious and rigid export regime for space business, ITAR and EAR, and so on. But the difference between Israel in the US is that in the US, you have space regulations. And if somebody has a start-up there, they know they need to go to the FCC and get a license. And you know, just the coordination with ITU and so on. Everybody knows how it works, how long will it take to do that, the cost involved, what kind of license you need, and so on. In Israel, currently, we have nothing. So there’s no space law at all. We’re not even a party to the registration convention. And I don’t know if our government understands the implications on the commercial side of things there. But it does harm business, especially for startups that want to attract VCs or investments in other forms. One of the things you need to know is what your risks are. And if you know regulation is a big risk because you don’t know what you’re going to encounter when you would want to perform that space activity. Because, of course, even if there is no space law, the state has to authorize it somehow. The problem is it’s not transparent at the moment, not at all. So we have to overcome that hurdle in Israel. We have to do a lot of work just to make sure whatever good ideas we have here, and good people and all the talent, and money, all of that. will grow into something significant, we also need to have, a clear, good regulatory regime. Without that, it would be very hard to achieve anything. So everybody complains about export laws, but they’re not even aware of all the other things that need to be regulated here (The state of Israel – m.p).

Dr. Neta Palkovitz. Is the founder of the NewSpace Firm, a consultancy specializing in space law, regulation, and NewSpace activities. She is a qualified lawyer since 2009. She worked as the Legal Adviser of ISIS- Innovative Solutions In Space B.V. (ISISPACE) in the Netherlands for 10 years, where she handled launch contracts for the launch of +500 satellites, amongst her other responsibilities. She then joined Airbus Defence and Space Netherlands B.V. as a Senior Contracts Officer and Bid Manager before starting her own consultancy. Neta holds a Ph.D. in space law from the International Institute of Air and Space Law (IIASL) at Leiden University and published a book titled: “Regulating a Revolution: Small Satellites and the Law of Outer Space”. Neta was a lecturer at the IIASL, and teaches space law at Tel Aviv University. 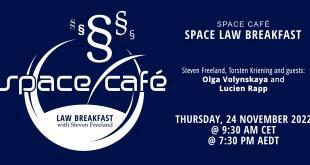