Ibadan, 23 November 2022. – The European Space Agency (ESA) has announced the new generation of ESA astronauts. The announcement took place at Grand Palais Éphémère in Paris, under the auspices of the Council Meeting at Ministerial Level (CM22).

The training will primarily take place in the European astronaut center in Cologne, Germany, and it will last for about a year. This preliminary training will not negate the need for specific mission training that the astronauts will undergo in light of the specific missions they will work on. The selected career astronauts include Sophie Adenot, Pablo Álvarez Fernández, Rosemary Coogan, Raphaël Liégeois, Marco Sieber, and John McFall.

The astronauts in the reserve pool will not immediately begin any engagements with ESA through a permanent contract, but they will be available for future ESA missions. Nevertheless, they will receive a short-term contract to facilitate interaction and work with them and the Agency pending when an opportunity may arise for them. In the event that such an opportunity arises, they will then undergo base training for the missions and projects. The astronauts selected for the reserve pool include Nicola Winter, Marcus Wandt, Sławosz Uznański, Aleš Svoboda, Amelie Schoenenwald, Arnaud Prost, Carmen Possnig, Andrea Patassa, Sara García Alonso, Anthea Comellini, and Meganne Christian.

Dr. Aschbacher noted that members of both categories are equally capable of flying to space as they have completed all the necessary tests. He added that due to the shortage of missions, the Agency had to start with an initial batch, the career astronauts with the reserve pool of astronauts waiting for a future opportunity.

The DG also disclosed his excitement at the gender and regional diversity that the selected astronauts demonstrated, as the crop included 50% women. The astronauts also included the first para-astronaut, John McFall from the UK. According to Dr. David Parker, ESA’s Director for Human and Space Exploration, the para-astronaut has also undergone the exact same selection, training, examination, and development as the other astronauts.

According to the Director, John McFall’s inclusion is exciting as the ESA is pioneering “something we are excited to be doing. We need to start the process and work with the individual, understand how to adapt the space vehicle, maybe something aboard the space station to ensure that they can live and work and do a meaningful mission aboard the station”.

Share
Previous Aschbacher obtains 16.9 billion for ESA to cover next 3 years activities
Next Register Today For Our Space Café Israel by Meidad Pariente On 30 November 2022 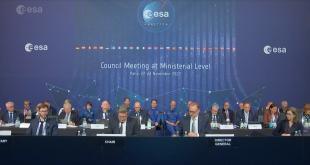