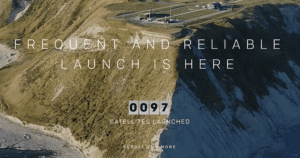 Paris, 10 February 2021. – They Go Up So Fast, that’s how it’s called: Rocket Lab’s next mission in mid-March will bring the total number of satellites launched by Electron to 104, the launch provider said.

Its mission will deploy a range of satellites for commercial and government operators and place a next-generation Photon spacecraft in orbit, the firm in Long Beach, California, said.

Scheduled to lift-off from Launch Complex 1 on New Zealand’s Māhia Peninsula in mid-March, the “They Go Up So Fast” mission will be Rocket Lab’s 19th Electron launch and its second mission in 2021.

The payload will include an Earth-observation satellite for BlackSky; two Internet-Of-Things (IoT) nanosatellites for Fleet Space and Myriota; a demonstration satellite for the University of New South Wales (UNSW) Canberra Space; a weather satellite pathfinder technology demonstration from Care Weather technologies; a demonstrator for the U.S. Army’s Space and Missile Defense Command (SMDC; and Rocket Lab’s own Photon Pathstone spacecraft which will operate on orbit as a risk reduction demonstration to build spacecraft heritage ahead of Rocket Lab’s mission to the Moon for NASA later this year.

Share
Previous Three missions to reach Mars, fourth one planned for 2026
Next Register Today For Our Space Café WebTalk “33 minutes with Blaine Curcio” On 2 March 2021