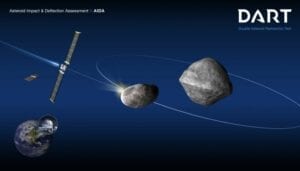 DART “will attempt a technique that could one day be used to prevent an impact by a hazardous asteroid. To prioritize both mission success & team safety I have directed that we pursue the secondary launch window, which opens Nov 24”, Thomas Zurbuchen, NASA science director, said on Twitter.

“This secondary launch window still allows the DART spacecraft to arrive at its target within a few days of the original schedule”, Zurbuchen said. “There, at the Didymos binary asteroid system, it will attempt its kinetic impact test and forever change the way we think about defending our planet.”

The European Asteroid Impact Mission (AIM) – conducted by the European Space Agency (ESA) – complements DART and is to watch closely how it hits Didymoon and examine the consequences on the body itself and its orbit.