Astra launched its Rocket 3.2 vehicle from the Kodiak launch pad in Alaska into a peak altitude of 390 kilometers but was “half a kilometer per second short” of the targeted orbital velocity, the firm said.

The California-based small rocket start-up considered the launch a success and showed itself “beyond ecstatic”. Rocket 3.2 was Astra’s second launch attempt this year; the first one, Rocket 3.1, failed in September, when the rocket crashed shortly after lift-off close to the launch site.

In the meantime, the other small rocket launcher Rocket Lab also had a success to celebrate; it successfully launched its 17th mission, deploying the first spacecraft in orbit for the Japanese synthetic aperture radar (SAR) satellite data and solutions provider Synspective.

Share
Previous #SpaceWatchGL Opinion: My 2020 in a review – by Guy Thomas
Next #SpaceWatchGL Interviews: Grant Bonin of Spaceflight Inc. – “Our ambitions are clearly beyond LEO” 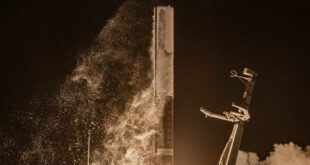