#SpaceWatchGL Opinion: A Space programme for the Nobel Peace Prize? – the answer might surprise you…

Very recently I overheard a conversation that went like this – “our programme has been operating in space for over 20 years and includes the key international space agency partners. It is an inspiration for our young and has done more for global peace than any other space project on Earth. It deserves the Nobel Peace Prize.” Yes you might have guessed it – the “programme” in question was the International Space Station (ISS).

Certainly the ISS been around now for over 20 years and who hasn’t marvelled at the sight of astronauts operating in Low Earth Orbit with its beautiful imagery of an Earth bathed in sunrise and sunsets every 90 minutes. Inspirational? Most definitely. But truly global? And promoting peace? Maybe.

So I thought about this a little further and the more I thought about it the more I became convinced that there is a better “space candidate”; one that has also been around for 20 years and, unlike ISS, is truly global across all the whole space family; one that quietly but effectively demonstrates the global good that satellites can offer human kind, especially in adversity. Most importantly it saves lives.

My alternative is the International Charter “Space and Major Disasters” organisation. 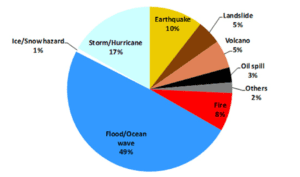 The International Charter Space and Major Disasters, hereafter referred to as the Charter, was proposed by the European Space Agency (ESA) and the French Space Agency (CNES) in 1999 as an output of the United Nations UNISPACE III Congress. They were soon joined by the Canadian Space Agency (CSA), and on October 20, 2000, the three agencies formally signed the Charter.

Since the Charter entered operations on November 1, 2000, the Charter (which I shall describe shortly) has been activated 680 times (as of October 19, 2020) to support disasters in 126 countries, including the earthquake and tsunami in the Indian Ocean in 2004, the earthquake in Haiti in 2010, Typhoon Haiyan in the South East Asia in 2013, the explosion in Lebanon in 2020. Membership of the Charter has grown from the founding 3 space agencies to (today) 17 space agencies and space system operators and their 61 satellites provide satellite imagery to disaster management authorities around the world. It includes USA (NASA and NOAA), Russia (Roscosmos), China (CNSA), India (ISRO), Japan (JAXA), the Middle East (UAESA), Brazil (INPE) and numerous European Space nations including ESA and Eumetsat. That is an impressive alliance when compared to ISS. The Charter has also directly saved numerous lives in the process.

I myself have had the past privilege to Chair this exceptional Organisation, as the UK Space Agency Delegate during its most active period of humanitarian support in 2017. I witnessed at first hand the dedication of its executive secretariate and the personal commitment of its Management Board to the very best ideals of what a space-based humanitarian programme should aim to achieve. It was no surprise that the Charter Family was recognised with the prestigious William T Pecora award for “its outstanding support to the global community during times of crisis” in 2017.

So what is the Charter and how does it work?

The Charter is a collaboration through which satellite data from satellites owned and operated by the member agencies and partners are made freely available for the benefit of disaster management. By combining data from these Earth observation satellites, the Charter allows resources and expertise to be coordinated for rapid response to major disaster situations; thereby helping civil protection authorities and the international humanitarian community.

This unique initiative is able to mobilise agencies around the world and benefit from their know-how and their satellites through a single access point that operates 24 hours a day, 7 days a week and at no cost to the user.

The satellite data obtained by the Charter offers invaluable aid to the end-users – typically disaster relief organisations. Following a successful activation of the Charter, they may receive satellite data of affected areas within a matter of hours or days; depending on the type of the disaster and available satellite resources. This data is delivered on an ongoing basis throughout the duration of the Charter activation (typically over 10 -14 days) and provides valuable information about a disaster that is simply not possible to obtain on the ground.

In addition to the 17 Charter members, the Charter extends its cooperation to disaster management entities throughout the world. These organizations in Charter member countries are classified as “Authorized Users” and can request the Charter to acquire emergency satellite observations for disasters occurring in their countries.

To extend the framework for serving humanity, the Charter also collaborates with external organizations. The Charter concluded agreements with the United Nations Office for Outer Space Affairs (UNOOSA) and the United Nations Institute for Training and Research (UNITAR) in 2008 and 2009, respectively, under which UNOOSA and UNITAR/UNOSAT can request emergency observations on behalf of United Nations users. In 2010, the Charter and Sentinel Asia, a regional framework for the use of satellite data for disaster management in the Asia-Pacific area, drafted an interface control document for cooperation. In 2018, a cooperation agreement was signed between the Charter and the European Union’s Copernicus Emergency Management Service (Copernicus EMS). The Charter also maintains cooperation with the Group on Earth Observations (GEO).

In 2012, the Charter adopted the principle of Universal Access, which enables any national disaster management authority to apply for registration as an Authorized User. As of September 2020, 73 national users from 67 countries are recognized as authorized users under the universal access provision.

Organisations that wish to co-operate with the Charter in this way must be approved by the Board (to insure they have an appropriate civil protection mandate) and may be granted exceptional requests for data from Charter satellites.

Finally Charter members and associates also provide support and training to those in need and benefit from the wide distribution of data that the Charter offers. This is a truly effective mechanism, offering best practice to nations often unable to understand how satellite imagery can best be used in the immediate aftermath of a disaster.

Today Charter members dedicate their efforts to realizing the ideal of the Charter, which is to provide satellite data to support disaster response worldwide. It is unfortunate that the Charter members could not come together to celebrate the 20th anniversary due to the corona virus pandemic, but the Charter will continue to expand and strengthen its support to humanity through the peaceful use of space technologies.

Isn’t it time someone proposed THIS organisation as the embodiment of space for humanity, space for peaceful purposes, in support of all citizens especially in their time of crisis? Isn’t it time for a nomination for the Nobel Peace Prize in its year of anniversary? I cannot imagine a more fitting tribute to honour the work of the Organisation.

Perhaps you may know someone who can make this happen… and the deadline is February!

Prof. Chris Lee: In April 2020 Chris retired from the UK Space Agency as Chief Scientist. He now undertakes occasional activity as an Advisor working for AstroSpace Solutions and is currently supporting the Space Academic Network (SPAN). Chris continues to champion the expertise of UK Industry and Academia across a variety of International Partnerships. He is a visiting Professor at the University of Leicester. Chris is also an avid amateur astronomer with Bristol Astrosoc and has a passion for sketching what he observes. Chris was also the UK Board Member of the International Charter “Space and Major Disasters” organisation (2014-2017) and Chair from April to Oct 2017. He developed an Agency-wide initiative on Sustainable Development (including the UK International Partnership Programme) until 2020.

You can listen to his Space Cafe Podcast here: https://spacewatch.global/2020/09/space-cafe-podcast-episode-012-featuring-chris-lee-is-now-available-2/ and on all major podcast platforms.