It is an exciting time for space enthusiasts, particularly those who aim for economic development of the Moon. The Moon is awash in new flights, plans, and missions over the next decade – and very likely, far beyond that. A recent graphic by the ESA captures the significant number of missions to the Moon, coming more than the institutional or traditional governmental side.

A significant number of commercial missions to Earth’s silent sister are in the works. NASA’s CLPS program is sending two missions per year to the Moon, and SpaceX, Blue Origin, and iSpace, among others, have joined this new tide of space expansion. Within a decade, there will most likely be hundreds of commercial and industrial systems on the Moon, as well as the steady growth of governmental infrastructures.

While this is exciting, this also begs two questions: Why this rapid growth in Moon-centric missions? And what does this mean for the future?

To answer the first question, we must put this expansion in a historical context. Nations consume resources, produce energy, organize their efficiency and survival and compete with other nations for further resources. Most environments are mature and, therefore, difficult to alter significantly. However, occasionally, new technology shifts the global equation. 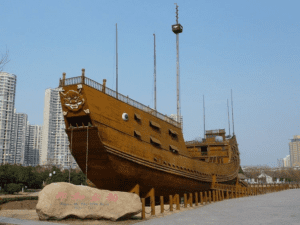 The last major physical expansion of mankind was in the 16th century. Europe went across the Atlantic and expanded and subsequently exploited the resources of the Americas. This resource-gain turned the under-siege Europeans into world-shaping powers well into the 20th century.

Seapower, the ability to trade and develop resources, and exclude others contributed to this massive increase in European power and prestige. In contrast, China also had a treasure fleet during the 15th century, but internal politics led to the burning of the fleet and a turn inward. This inward turn culminated in a series of humiliating military defeats during the 19th century and the subsequent occupation by the same European powers and Japan, who had learned the importance of expansion.

What does this have to do with the Moon? It’s transportation: Before European vessels were able to navigate across the Atlantic and discover the Americas, the unknown continent was even further away than the Moon is for us nowadays. However, once they were able to travel – and it became economically viable – the flood of conquistadors, settlers, trappers, and missionaries began. Likewise, the Moon is the next strategic arena with launches and missions becoming ever more powerful and cheaper and, for the first time, commercially interesting. SpaceX, in particular, has not been shy about planning to go even farther, to Mars. The Moon, however, is the first step.

There are significant resources on the Moon, in particular hundreds of tons of water trapped in ice at the North and South poles. These poles are also peaks of eternal light, areas of constant solar power and, at least for space, relatively minor temperature swings. The Moon also has iron and other industrial resources that make building Moon settlements possible, with in situ fabrication, using Moon resources through 3D printing or similar technologies.

The Moon is also, in military parlance, a strategic Key Terrain, a term including both military and civilian uses. Launching off the Moon has a huge advantage: it requires 22 times less effort because Moon’s gravity is much less than Earth’s. The Apollo program required the massive Saturn V rocket to get off the Earth, but only the lander’s relatively feeble rocket was sufficient to depart from the Moon again.

The current strategic geopolitical situation frames all of this. China is a rising power, and Russia is also attempting to challenge the US for its relative position of superiority in the world system. However, in an age of nuclear weapons, this conflict does not seem likely to become a struggle for absolute supremacy that generates a WWIII. No, this is much more reminiscent of the Chinese game of Go – more about influence and preemptive positioning than conquest and absolute victory.

The key to influence is the economy. Money talks and enough of it can drown out unpopular opinions. China has a history of using its economy to suppress unpopular opinions in other countries. Most recently, support for the Free Hong Kong movement was stifled in both a video game tournament and in the NBA, where Chinese companies threatened to pull financial support if their demands were not met.

History, technological progress, and the current geopolitical struggle are the backdrop of the coming strategic competition for the Moon. As locations and domains, traditionally too expensive to access, see access costs reduced, the latent resources there will drive the next scramble. The Arctic and Antarctic are already experiencing this as the ice retreats, and the abundant energy resources in both locations drive competition.

Notably, this competition is occurring despite the Antarctic Treaty (which is very similar to the Outer Space Treaty, OST, which is supposed to prevent such competition). The lesson here is that, in the absence of superior power to keep equality between competing parties, nations will not restrain themselves if victory or defeat is in the offering. Such treaties raise the cost of transgression – but if the potential reward outweighs the costs, they are a speed bump and not a wall.

The Moon is the next location for national competition. The Cislunar Economic Zone will almost certainly include space-based solar power (SBSP), space tourism, asteroid mining, in-space refueling, and in-space industrial production. This new economy is estimated to be worth hundreds of billions of dollars, able to tip the scales toward either the US-led or China-led world order that are both seeking to either establish or maintain themselves.

Nowhere else in the world is there such an unexploited area able to so rapidly tip the balance. That is why the US formed the US Space Force, and China has the PLASSF (PLA’s Strategic Support Force). Furthermore, the Moon is the “Canary Islands” of expansion – the first step into a much broader Solar System brimming with resources to fuel national economies. Whoever controls the Moon controls that steppingstone.

This is why some Chinese international figures, like Guoyu Wang, have attempted to undercut the Artemis Accords and other US space propositions – in a recent article critiquing the Accords. He finishes by exposing his real concern – that the US can use them to isolate China.

The hope in the 1990s was – and for many arguably still is – that China would be welcomed into the world system, including the WTO, and would democratize and be a valuable partner in keeping world peace for the coming century. What happened was welcoming a wolf into the sheep pen. China has not democratized, nor have they become a partner. They have claimed to be a friend while they stole hundreds of billions of dollars worth of US intellectual property and used it to prop up their economy. No more.

China thought that they were going to pull even with the US economy this year – but have slowed significantly, while the US’ stock market recently rebounded to pre-COVID levels. Furthermore, to deter future theft, the US has imposed a punishing embargo on China, resulting in China’s leading phone maker admitting they were unable to continue production as that segment suffered as a result of US actions.

Because both sides have weapons capable of ending the world we live in, this will not be decided in a year or even in a decade. However, the Moon rush is coming in the next two decades. China, and Russia have both said they will have crewed, permanent Moon bases by 2040. The US has also committed to having a Moon base established. If the order can be maintained in space, it will not be through treaties alone or the threat of force used on Earth. The US Space Force, and the military and civilian organizations of other democracies around the world, must stand against the aggression posed by China and Russia. Securing the lunar resources are the first step in ensuring that.

Without the ability to bully other nations isolated from the international order, those two nations will be unable to secure an unfair amount of the resources – and the strategic locations. If they do, and China can hold the critical terrain, then there will be little the international order would be able to do. As the space expansion continues, and it almost certainly will, to Mars, the Asteroid Belt, and beyond, the danger is that it could be the Chinese flag flying over the world – both figuratively, and most likely, literally. Therefore, Moon missions are key – they are the first step off-world, and the first step toward forming a stable in-space economic zone that will benefit all.

Joshua P. Carlson is the author of Spacepower Ascendant, a book independently published through Kindle Publishing and available through Amazon. It was the culmination of nearly twelve months of dedicated research and evaluation of both the US’ and China’s view of the space domain – and the ongoing strategic conflict there.
He serves in both the US Army and US Air Force in different capacities, serving at LA Air Force Base for nearly ten years and the California Army National Guard for fifteen. He has also deployed with the Army to the Middle East in support of Operation Inherent Resolve in 2018. He also attended the Air Command and Staff College through the Air Force, graduating in 2020. He is currently working on a new book with an as-yet unpublished author that is targeted for next year. Additionally, has been invited to speak on a few shows, including the US Space Force Association. He looks forward to continuing to advocate for a more holistic look at space and looking toward expansion/exploitation of space resources for national and global benefit. He continues to serve in both the USAF and Army, and currently lives in Texas with his wife and three children.
His views expressed are his own and do not represent the USAF, US Army, US Space Force, or any other US Government entity.