The Association Agreement between ESA and the Government of the Republic of Latvia enters into force for a duration of seven years. Comprising 18 Articles and two Annexes, it orchestrates the strengthening of Latvia’s relations with ESA. Following its approval by ESA Council, meeting at ESOC in Darmstadt on 24 June, the Agreement was signed on behalf of ESA by Director General Jan Wörner. The Latvian Minister of Education and Science (IZM) Mrs Ilga Šuplinska subsequently signed it on 30 June in Riga, prior to its ratification by the national Parliament which was notified to ESA on 27 July.

Mrs Šuplinska stressed that becoming an Associate Member of ESA will open up new opportunities for Latvian scientists and entrepreneurs to cooperate with the European space industry, and advance research and development. The stepped increase in contribution foreseen is regarded as ‘an investment in the people of Latvia, as participation in European space missions and consortia will enable practitioners to develop high-tech skills and competences in the space sector.

Researchers will carry out  projects under the supervision of ESA experts, using ESA’s research infrastructure, as dedicated access to agency facilities and services will be provided to Latvia’s national space projects. Such contribution would bring economic growth, in granting access to technology for space missions involving 22 European countries and international partners from the US, Japan, Canada and other technologically advanced countries.

The Associate membership will allow direct Latvian participation in optional programs, subject to the unanimous approval of respective participating ESA Member States. Among the programs proposed at the Space 19+ Ministerial Council in November 2019, GSTP-1, EOEP-5 and Space Safety (a new basic pillar of ESA’s activities) have been jointly identified as matching Latvian industrial capabilities. Subscribing to those would also be consistent with the priorities set in the Latvian space strategy in the making, in terms of public policies and stakeholders interests.

At the Space 19+ meeting, the Latvian State Secretary of Science and Education, Ms Līga Lejiņa, pointed out that, “Deepening relations with ESA is the cornerstone of Latvian space policy. The single space strategy for Europe should provide a real incentive and opportunities on capacity buildings in Members States and regions which do not have traditions in the space sector.” She was accompanied by Mr Kaspars Karolis from the Department of Higher Education, Science and Innovation, directed by Mr Dmitrijs Stepanovs, Deputy State Secretary, ensuring the institutional interface for space-related matters in Latvia.

Latvian delegates and advisers will be entitled to attend meetings of ESA Council and its subordinate bodies, and to vote on questions relating to the activities and programs in which Latvia participates, in its capacity of Participating State in the case of optional programs. An incentive scheme, in the form of Requesting Party Activities, aims at further developing Latvia’s industrial base, with the support of ESA experts. Such technical assistance and expertise have proven instrumental in the capacity building process, since the first Cooperation Agreement concluded on 23 July 2009.

ESA has now established formal relations with all the 13 States that acceded to the European Union since 2004, and are thereby associated to the definition of an overall European Space Policy and participating with full rights and obligations in the EU Copernicus and Galileo programmes. While Latvia was the first country to approach ESA, it followed Hungary, the Czech Republic, Romania, Poland, Estonia and Slovenia in joining the European Cooperating State (ECS) status, a frame for cooperation dating back to 2001.

The five first countries have become Member States between 2008 and 2015, and Slovenia became an Associate Member in 2016. Latvia was followed as ECS by Lithuania, Slovakia, Bulgaria and Cyprus, while Malta and Croatia have concluded Cooperation Agreement in 2012 and 2018 respectively. Signed on 15 March 2013, the ECS Agreement entered into force upon signature of the Plan for the European Cooperating State Charter (PECS) on 30 January 2015. It was lately extended for six months, until 29 July 2020, through an exchange of letters.

The joint review of the five-year implementation of the ECS Agreement, as well as the independent assessment performed in parallel by Invent Baltics in September 2019, confirmed the success of the various PECS projects involving Latvian entities in ESA’s programs and activities. Until now, fifteen different entities have been selected to conduct over fifty space technology development projects.

Twelve proposals recommended after the sixth PECS call still have to be implemented. The overarching objective was, through an enhanced and mutually-beneficial cooperation, to ensure a successful integration of Latvia in the frame of ESA, the further development of sustainable and competitive industrial capabilities, and their integration in the space supply chain, while securing ultimately a fair geographical return to the country.

Latvian’s involvement in space is driven by a ‘niche approach’ to innovation, building on their historical heritage of space technologies and competences initially developed in Soviet times. The educational dimension is seen as pivotal for the development of the expertise required for geospatial data processing and operations.

This approach was further developed on the occasion of the visit of Mr Ralfs Nemiro (former Latvian Minister of the Economy) to ESTEC on 12 September 2019. Heading a Delegation of Latvian officials, researchers and entrepreneurs, Mr Nemiro was accompanied by the IZM Parliamentary Secretary, Ms Anita Muižniece. They were welcomed by the ESA Director General, Head of ESTEC Dr Franco Ongaro and Director of Industry, Procurement and Legal Services Mr Eric Morel de Westgaver.

As climate change and ice monitoring are key concerns in the area, the Associate membership will also enable Latvia to benefit from the Baltic initiative developed under ESA’s auspices, with a view to promote synergies among regional partners for the development and specific use of space systems. This Associate membership is another step towards achieving the ‘united space in Europe’ strongly advocated by ESA’s Director General.

Share
Previous #SpaceWatchGL on the road: a Serbian ‘case’ for Cybersecurity in space
Next UAE space program to boost Asia’s stake in space development 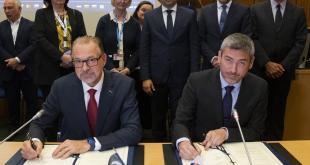 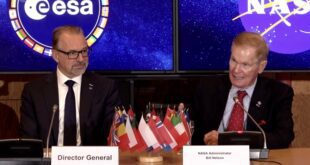