Enough of the daily overdose of bad news. It is time for a defiant and upbeat message. After all, defiance in the face of adversity is what we will need to succeed in space in general, so what else is new? This is the first in a short series of articles trying to strike such optimistic tones – in a constructive way, with tangible arguments and data, rather than just soothing words.

In today’s article we will take a look at hiring in the space sector and –spoiler—will find out that it is very much continuing. This is perhaps not all that surprising when we remember that the space sector does have the advantage of being ‘backstopped’ by a handful of powerful, financially strong players like government agencies, Blue Origin and SpaceX.

In order to assess the hiring situation in the space sector, we have looked at some of the most widely used aggregator sites of space job listings and chose two that we judged to have a variety of listings across companies, geographies and functions. In either case, we consider job listings from 01-Jan-2020 thru 22-May-2020. Sites 1 and 2 feature 504 and 1663 job listings in this timeframe, respectively. Note that we have tried to eliminate duplicate job listings.

Sites 1 and 2 currently have 107 and 129 unique hiring companies, respectively, with job listings during the investigated timeframe. The following tables show the top 20 hiring companies for both sites.

The following tables show the top 10 countries for job listings during the investigated timeframe. Job listings on Site 1 and 2 currently have 47 and 29 unique countries, respectively. We have decided to aggregate on a country level, even though sometimes more detailed information is available. It is worth noting that e.g. in the U.S., there are jobs all over the country, in states including Alabama, California, Colorado, Florida, Texas, Virginia, Washington and others.

Since job listings often describe what are the same or similar positions in similar terms, we have not tried to aggregate the listings into any sort of ranking by function. Instead, to still gain some sort of idea of the most common roles, we have generated word clouds based on the most frequent terms in jobs advertised on the sites. The bigger the word in the word cloud, the more frequently it features in headline job descriptions. As you can tell, to some extent the two word clouds are pretty similar and feature unsurprising terms. For Site 2, some company-specific terms appear like e.g. “Starlink” and “Glenn”, reflecting the prominence of the related companies on that site. 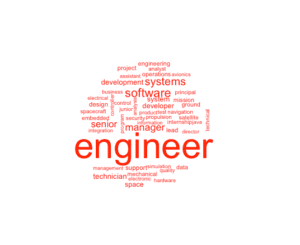 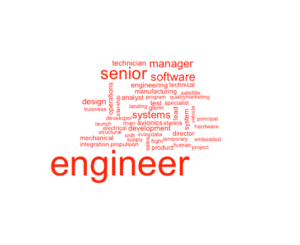 Finally, we reach the analysis referred to at the beginning of this article. We have looked at job listings on both sites week-by-week since 01-Jan-2020.  As you can see, one would be challenged to find a COVID dip – possibly even to the contrary. One caveat: our attempt to weed out duplicated job listing may result in an overweighting of more recent job listing if companies were to re-post unfilled positions. 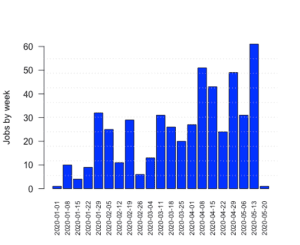 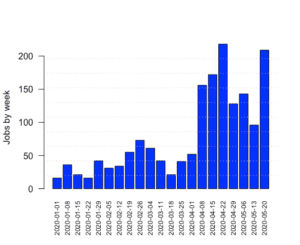 It is worth noting that there are obviously other aggregator sites out there, with jobs that are not listed on either of the two sites analyzed above. Furthermore, some companies choose to only list jobs on their own websites (e.g. check out The Aerospace Corporation’s job board with currently 365 listings) or not list them at all and rely on either recruiters and/or word-of-mouth and networking. Just through my daily activity as an advisor to and investor in space companies, I am aware of many such cases. Lastly, the above misses one specific big hiring organization, which recently put out its first recruiting ad: the new U.S. Space Force.

Laurie Scott, a recruiter focused on the space sector, commented: “Companies with funding in place are still focused on expansion and will likely view this moment as an opportunity to bring in talent without getting into bidding wars with competitors.”

This is all to say that, while the above analysis already drives home the point that hiring by space companies is continuing, it is understating the true availability of jobs. Over 150 years ago, a prominent American newspaper editor coined the phrase “Go West, young man”, referring to the opportunity that arose from the opening up of the American West. Nowadays, we may be inclined to say: “Go to Space, young women and men!”