The first test models of Ariane 6 are being manufactured while Europe’s Spaceport in Kourou, French Guiana, is preparing to test the launch vehicle and all systems involved with launch.

Under ESA’s responsibility, upcoming tests will show that the launch complex is ready for Ariane 6, and prove the launch system interfaces and performances for launch.

Engineers will rehearse procedures and test all ground functions in combination with the launch vehicle. Fuel tanks will be filled and drained; Ariane 6’s core stage will be static fired; and test sequences involving a new cryogenic connection system will mimic lift-off conditions.

The third model of Ariane 6’s P120C solid fuel strap-on booster is due to be static fired at the Spaceport early next year. The data from this will help to define the launcher’s acceleration profile.

The qualification of Ariane 6 software is also progressing fast. A first simulation this summer mimicked separation of the Galileo mission spacecraft from the launch vehicle. During these complex procedures, engineers were able to verify in particular the correct behaviour of the Guidance, Navigation and Control algorithms.

The facility in Les Mureaux, France, is built to produce up to 12 Ariane 6 main core stages per year, managing up to seven to eight stages at the same time in series.

Marking a significant milestone, Ariane 6 officially entered into production with the order for 14 launch vehicles (flight models 2 to 15) in view of the upcoming four Ariane 6 launches.

In Bremen, two Ariane 6 upper stages are being prepared: the hot firing model to be tested in Lampoldshausen, and the combined tests model that will be transported to Kourou.

The upper stage destined for Lampoldshausen will undergo tests that simulate flight. The tests at the P5.2 stand include the Vinci engine firing; non-propulsive ballistic phases; tank pressurisation; Vinci reignitions; exhaust nozzle manoeuvres; and ending with passivation where all remaining internal energy is removed.

In August 2019, the technical qualification of the Ariane 6 launch base began with a mechanical test campaign.

Two ‘dummy’ versions of the P120C boosters filled with water instead of solid propellant were transferred and positioned on the launch table.

Completed by November were the two flame trenches, the mobile gantry, the water tower, and the launch table structure.

At liftoff, the fiery exhaust plumes will rush 25 m deep below the launch table and be diverted into the flame trenches by a 600-tonne steel deflector deluged by cooling water fed from the water tower.

The main remaining structures to be finished are part of the cladding of the mobile gantry, the lightning towers that will be erected around the launch table to protect against lightening strikes, and parts of the additional surrounding areas.

This week, the fixed umbilical mast was finalised. It provides power and environmental control connections to Ariane 6 and its payloads from mission preparations through the countdown and liftoff.

With the mast complete, it meant that the 90 metre-high mobile gantry could move the full length along its rails from the retracted position up to the launch pad. When the mobile gantry is in this position, Ariane 6 is fully protected and accessible to engineers. This rolling manoeuvre will be practised until 29 November. 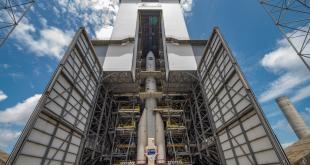