#SpaceWatchGL Op’ed: Behind the Second Modi-Xi Informal Summit, the Wuhan Spirit Is Fraying

As part of the partnership between SpaceWatch.Global and Dr. Rajeswari Pillai Rajagopalan, we have been granted permission to publish selected articles and texts. This is “Behind the Second Modi-Xi Informal Summit, the Wuhan Spirit Is Fraying”, originally published 10 October 2019 at The Diplomat. 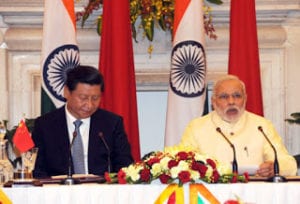 In this week’s column for The Diplomat, I write on the second Modi-Xi informal summit scheduled to begin later in Mamallapuram today and conclude by tomorrow.

The second informal summit between Indian Prime Minister Narendra Modi and Chinese President Xi Jinping is set to take place in Mamallapuram, a coastal town in south India from October 11-12. The meeting between the leaders of the two Asian giants will be closely watched, with consequences not only for their countries but the wider Indo-Pacific region and the world as well.

The Ministry of External Affairs (MEA) made a formal announcement of the visit just a couple of days before the visit. The statement added that the agenda was discussing “issues of bilateral, regional and global importance and to exchange views on deepening India-China Closer Development Partnership.” The two sides appear to be setting expectations low, with good reason.

Prior to the announcement, the Indian media was full of speculation that the summit could even be cancelled. Despite the Wuhan Summit in 2017 and the so-called “Wuhan spirit,” India-China relations have been characterized by a growing number of disputes.

The most serious of these, at least from Delhi’s perspective, is the strengthening Chinese support for Pakistan. Just days before the summit, the Chinese ambassador in Pakistan, Yao Jing, expressed strong support for Pakistan’s position on the Kashmir dispute, saying, “We are also working for Kashmiris to help them get their fundamental rights and justice. There should be a justified solution to the issue of Kashmir and China will stand by Pakistan for regional peace and stability.” This was a red flag for India and led to India lodging a strong protest with China and seeking clarification on what appears to be a change in Beijing’s stated stand on Jammu and Kashmir.

Beijing’s official stand has always been that Kashmir was a bilateral issue between India and Pakistan, left over from history, that needs to be resolved directly by the two countries. So, the change in China’s position was surprising and was seen by official New Delhi as an effort to interfere in India’s internal affairs. Moreover, this came after the strong Chinese support for Pakistan on Article 370 issue, when Beijing forced a UN Security Council discussion on the issue. China also took an unusually strong position on India effectively removing Article 370 (which had ensured local autonomy for the Indian state of Jammu Kashmir) and creating a separate Union Territory (a province directly ruled from New Delhi) in Ladakh. This was despite India’s foreign minister S. Jaishankar travelling to Beijing to explain that the Indian actions in Kashmir had no additional or negative or implication for the Sino-Indian border dispute.

After several strong statements on India by Chinese officials, there was a thawing of the tensions with a Chinese Foreign Ministry statement on October 8. While responding to a question, the Chinese foreign ministry spokesperson said, “China’s position on the issue of Kashmir is consistent and clear. We call on India and Pakistan to step up dialogue on disputes including the Kashmir issue to enhance mutual trust and improve relations. It serves the common interests of both India and Pakistan and represents the shared expectation of regional countries and the international community.” Earlier references to UN resolutions, which irritated India, was missing from this statement.

But the thaw, to the extent that it existed, was short-lived. Not only did China host a visit by the Pakistani Prime Minister Imran Khan just days before the Xi-Modi summit, the joint China-Pakistan press release also brought back language in reference to Kashmir that India had objected to, asking that the dispute be “resolved based on the UN Charter, relevant UN Security Council resolutions and bilateral agreements.”

Beijing, of course, has its complaints too. China had raised objections to the Indian military exercise Him-Vijay in Arunachal Pradesh, executed by the Indian Army’s 17 Corps. The Indian government is reported to have clarified that the ongoing exercise is part of the routine familiarization and orientation exercises and has nothing to with Xi’s visit to India.

This is not the first time that China has objected to military exercises or movements in Arunachal Pradesh. China has continued to maintain that Arunachal Pradesh is “southern Tibet” but India has always countered such statements by saying that Arunachal Pradesh is an integral part of India. Moreover, India had also participated in an elevated foreign minister-level meeting of the Quad countries in the sidelines of the UN General Assembly annual meeting, despite China’s objections to all such Quad meetings.

Clearly, Modi and Xi have a lot to discuss. But with new issues piling up, it is unclear if such ‘informal’ summits can do much to improve ties. Personal reassurances are unlikely to overcome growing real disagreements between the two sides, especially considering that the two sides do not seem to care very much to even hide their disagreements anymore.

The original can be find here – https://securitystrategyrajagopalan.blogspot.com/2019/10/behind-second-modi-xi-informal-summit.html Rights reserved – this publication is reproduced with permission from Dr. Rajeswari Pillai Rajagopalan.