On Oct 30 2017 representatives of the Sultanate of Oman and the Austrian Space Forum (OeWF) signed their agreement to conduct the OeWF’s next Mars-Analog-Mission in the desert of Oman. His Excellency the Austrian Ambassador to the Kingdom of Saudi Arabia, Sultanate of Oman and Republic of Yemen, Gregor W. Kössler as well as 200 guests attended the ceremony in Mascat, Oman. 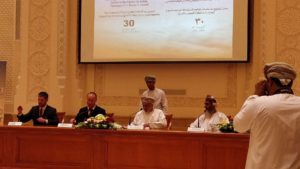 Dr. Gernot Grömer: „In the Sultanate of Oman we have gained a strong and reliable partner for our next mission. Today’s signing of our Memorandum of Understanding marks a major milestone in the preparations for our 4-week in the Omani desert. Together with the Oman National Steering Committee we have recently identified the exact site for our simulation and are now stepping into a very intense phase of training and preparations. Already by the end of December our equipment will be shipped to Oman.” 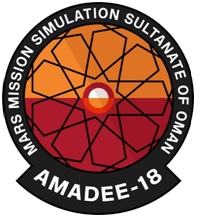 Also the AMADEE-18 Mission Patch was presented.
The AMADEE-18 mission is organized by the Austrian Space Forum in partnership with institutions from more than 20 nations.

The Patch symbolizes a typical Arabic ornamental pattern. The nodal points of the black lines stand for the multidisciplinarity of the experiments, whilst the orange hues are a symbol of a desert sunset. Under the motto “Two worlds. One sun.”, the AMADEE-18 mission patch also stands for the sun as a common feature explorers will see on both Earth and Mars.

WHAT ARE MARS ANALOG MISSIONS?
To prepare for future crewed missions on Mars, the Austrian Space Forum organizes Mars simulations on Earth. In 2015, the Austrian Space Forum and international partners conducted its 11thanalogue mission AMADEE-15- a two-week Mars simulation mission on a rock glacier in the Kaunertal, Austria that resembles Martian terrain. Communication between the Mission Support Center and the field crew was time-delayed to emulate the conditions of a Mars expedition. The Analog-Astronauts performed crucial experiments in the fields of geology, astrobiology and engineering, thus gathering valuable data for future missions on Mars. Dr. Gernot Grömer, President of the Austrian Space Forum (OeWF), emphasizes the importance of Mars Analogue Missions:

“Through testing equipment, software, procedures and workflows that will be implemented in future human missions to Mars we try to find out what is not yet working, what needs to be redesigned, rethought. After all, it’s better to find the flaw in Mars-equipment here on Earth rather than on Mars where spare parts are a 6-months-journey away at best.”
The Austrian Space Forum’s missions draw considerable media and social media attention across the globe. More than one million people followed the last mission and got a closer look at the cutting edge of research in Austria.

AUSTRIANSPACE FORUM (OEWF) IS ONE OF 5 GROUPS WORLDWIDE TO DEVELOP A MARS-SUIT-PROTOTYPE
To perform the experiments, the OeWF’s Analog-Astronauts wear the 45kg prototype spacesuit “Aouda” with an incorporated interface to assist the astronaut. The spacesuit is designed to deliver the astronaut’s vital data and mimic the restrictions of a spacesuit that will be worn by astronauts on Mars. Aouda provides movement restrictions, limited sensory input as well as the weight and an uncomfortably high centre of gravity typical of a pressure suit worn in space. Thus it enables the Austrian Space Forum’s Analog-Astronauts to test equipment, workflows and experiments meant for the Red Planet under Mars-like conditions. By developing the spacesuit simulator the Austrian Space Forum also aims to optimize interactions with other (robotic) components – such as a rover – and minimize the risk of human contamination.