The Precision Instrument-Making Systems research and production corporation (part of the State Space Corporation Roscosmos) has signed a contract to place a non-request measuring station of the SM-Glonass satellite navigation system in the municipality of Colorado do Oeste (the state of Rondonia in Brazil), Roscosmos reported. “This is the seventh non-request measuring station in the structure of the foreign segment of the Glonass measuring stations’ network being set up by the Precision Instrument-Making Systems as part of the Signal experimental design work,” Roscosmos said in a statement.

The Russian company signed the corresponding contract with the Federal Institute of Education, Science and Technology of Rondonia and the Research Support and Development Fund. The measuring station of the SM-Glonass system is designed to continuously monitor the signals of the Glonass, GPS, Galileo, Compass and QZSS navigation systems. The station is also required for controlling the reliability parameters of navigation signals of global navigation satellite systems.

Roscosmos representative in Brazil Gennady Sayenko earlier told TASS that the fifth non-request measuring station of the Glonass satellite navigation system was due to begin its operation in Brazil until the end of this year. The station will be the first facility in the country’s north.

As Sayenko also said, two stations of this type were installed in Recife (the capital of Brazil’s northeastern state of Pernambuco) and Santa Maria (in the southern state of Rio Grande do Sul). Two stations of different types are operating in the Federal University of Rio de Janeiro.

In July, the Precision Instrument-Making Systems research and production corporation signed a contract for placing the sixth non-request measuring station of the SM-Glonass satellite navigation system in the city of Belem (the state of Para in Brazil).

The non-request measuring stations developed by the Precision Instrument-Making Systems are designed to increase the precision and improve the performance of the Glonass system. As Sayenko specified, apart from fulfilling their main task, they can also be used by Brazilian scientists for their own research. 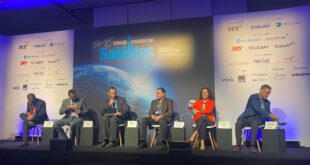