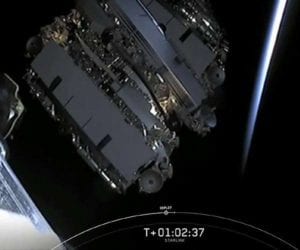 The US Federal Communications Commission (FCC) has approved SpaceX’s February 2019 application to deploy up to one million user terminals throughout the United States for the Starlink satellite communications constellation.

In a public notice posted on the FCC’s website on 18 March 2020, the US government agency granted SpaceX a 15 year license “for the operation of up to 1,000,000 fixed earth stations that will communicate with [SpaceX’s] non-geostationary orbit satellite system.”

The original SpaceX application to the FCC for the user terminals stated that, “user terminals [that] employ advanced phased-array beam-forming and digital-processing technologies to make highly efficient use of Ku-band spectrum resources by supporting highly directive, steered antenna beams that track the system’s low-Earth orbit satellites.”

Speaking recently at the Satellite 2020 industry show in Washington, DC, SpaceX founder Elon Musk described the Starlink user terminals as being “like a UFO on a stick,” adding that the devices will have actuators that will automatically point it in the right direction.

“It’s very important that you don’t need a specialist to install it. The goal is that… there’s just two instructions, and they can be done in either order: point at sky, plug in,” Musk said at Satellite 2020.

Musk also added that Starlink will likely only serve “three or four percent hardest-to-reach customers for telcos,” as well as, “people who simply have no connectivity right now, or the connectivity is really bad.” This statement has raised questions among some analysts about the commercial viability of Starlink with its planned 11,943 satellites and all of the attendant development, manufacturing, launch, and operational costs.

There is no information at present regarding SpaceX plans – if any – to deploy its user terminals in countries other than the United States.