#SpaceWatchGL Op’ed: Reflections on 2019 – A Turning Point In the Space Industry? – By Blaine Curcio

SpaceWatch.Global asked its staff and contributors to review 2019 and provide an outlook into 2020. These personal reviews are being published during the holiday season. This is Blaine Curcio of Orbital Gateway Consulting.

Reflections on 2019—A Turning Point In the Space Industry? 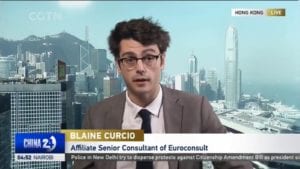 Every year seems to be the most important year ever in space, but we may well look back on 2019 as a major turning point for our industry by itself, and perhaps more importantly, for the role that space will play in the broader economy moving forward. Being based in Greater China more or less continuously since 2011, my views on the industry are to some extent APAC-focused, however, as an American who spent nearly half of 2019 in North America and Europe, my views on 2019 will be global, which is probably good since so many significant events occurred in so many places throughout the year. Without further ado, my highlights of what may have been the busiest year ever so far for the space industry.

A New World for Investors in Space

The space industry has historically been largely dominated by a handful of large companies. For the average investor, this has meant that opportunities to invest in the space industry can have sometimes been limited to buying shares of huge, established players. In 2019, as space has become sexier in society more broadly, we have seen investment opportunities increase as well. 2019 saw the first space-focused exchange-traded-fund (ETF), the Procure Space ETF with a witty ticker, UFO. The fund’s holdings include Maxar, Garmin, Sirius XM, Sky Perfect JSAT, etc. Separate to UFO, the space industry saw Virgin Galactic start trading publicly, another instance of space becoming more accessible to ordinary investors, and also saw a plethora of new VCs get involved in both East and West, indicating an increased interest by larger investors in the high-risk, potentially high-return world of the space industry. Finally, mega-rounds completed by OneWeb, as well as debt financing done by SpaceX and assumed financial investment by Amazon in Kuiper represented some of the largest investments in the industry throughout the year, and were an indication that while the investment climate is opening up, the industry remains small enough to where a few large investors can play a dominant role.

Constellations: A Different Scale Than Before

2019 has seen constellations reach a different scale. StarLink launched 120 satellites of several hundred kg over the course of two launches, and while several people have rightly pointed out the fact that several satellites have failed and that StarLink has been borderline reckless in its approach, this nonetheless represents a significant acceleration in deployment of satellites. Separate to StarLink, Amazon announced its Kuiper constellation in 2019, with plans to bring broadband to remote places. OneWeb closed another round of financing during the year, with the company’s total funds raised now exceeding $3 billion. LeoSat became the most significant constellation of this generation to cease operation, due to difficulties faced in its series-A round of funding. In China, constellations have seen limited public progress in 2019, with this in part due to a “wait-and-see” approach. In the next couple of months, we will see Xingyun and Galaxy Space launch new test payloads, and as western constellations build out in 2020, China may accelerate.

Commercialization and Internationalization—On the Rise in a Rapidly Closing World?

Many industries have become more nationally sensitive over the past year, due in part to the U.S.-China Trade War. However, space has seen more international cooperation, and to some extent more commercialization, with this due to two major factors. First, space is coming from a low base in terms of level of commercialization—most space activity is now at least in part non-commercial in nature. Second, with the U.S. and China increasingly jockeying for political influence in third countries, and with space being high on the wish list of many such developing countries, there has been an increase in cooperation between developing countries and developed ones (usually China). In 2019, this included China and Egypt kicking off production of the MisrSat-II satellite, a satellite that will be built in partnership between the two countries, but with assembly and testing all occurring in Egypt via Chinese technology transfer. Other examples of increased international cooperation in space in 2019 included a high-level meeting between China and France that saw increased cooperation in space outlined, as well as an ESA ministerial that saw record levels of funding committed by European governments towards the intergovernmental space agency.

2019 saw space become more prominent in broader society. This has been achieved by billionaires entering the industry and by shaking up established business models, but also through small-scale efforts by space companies to encourage dialogue and involvement with broader society. Moving forward, space is likely to become even more prominent for the next few years at least, after which time many highly speculative business models will need to either start delivering, or face a collapse in funding.

In the meantime, the industry will continue to inspire wonder and build bridges across countries and regions. 2019  has seen a slew of new companies from a plethora of countries that have previously had minimal space activity, and has seen the space industry pop up in popular culture more and more often. 2020 will see more companies, more startups, more internationalization, and more innovation leading to space becoming a more inclusive industry. Space may be physically still very far, but with every launch beamed to millions of people on Twitter, with every consumer connected to broadband via satellite, or indeed, with every click to this article, space becomes a little bit closer to our collective consciousness. That is a trend likely to continue in 2020.