The benefits of space to the Middle East and North Africa region are undeniable, yet there is no single representative body to champion the sector. The near total inexistence of coordination or even collaboration has resulted in calls for the creation of a Pan-Arab Space Agency, to operate and coordinate programs in a comparable manner to the European Space Agency (ESA).

Creating such an agency would reduce the costs of launching and operating satellites, whilst allowing many countries to benefit from the images and data collected. The avoidance of needless duplication of investment in the creation of broadly similar assets, as well as the pooling of human expertise and other resources, could then be entertained.

Management theory typically suggests that the formation of a successful alliance is initiated by champions within the decision maker team. Unless a political motive focuses partners towards cooperative action, then it is possible that the alliance will not form whatever the evidence of industrial logic maybe.

The consequences of the Second World War produced the political motivation amongst European countries for their cooperation to enhance prosperity and the avoidance of further war. ESA’s origins therefore lie with the recognition in the 1960’s that this recovering and still divided post-Second World War Europe was falling behind the United States in technological activities. Scientists realised that solely national projects would be unable to compete with the two main super powers, with negative consequences for the continents aeronautical industrial base and consequent economic and security independence. Skilled engineers and scientists were likely to migrate if they could not be provided with sophisticated projects to work on. And, of course, the Cold War created a common external threat that encouraged cooperative activities.

The members of the Arab League face both similar challenges and newer ones. The effects of global change and population growth having taken their respective tolls on the environment; with desertification, depleted water resources and poor air quality increasingly becoming transnational concerns. In addition, poorer member nations need to be assisted on a path towards their sustainable development if the volatile politics of the region are ever to be stabilised.

The political background that created ESA is therefore both equally and truer for the Arab League; yet to date little overall progress in intergovernmental space cooperation has been made. The door has been left open to individual countries pursing autonomous solutions, often through deals with suppliers belonging to major foreign powers with consequent exposure to both political and financial indebtedness. 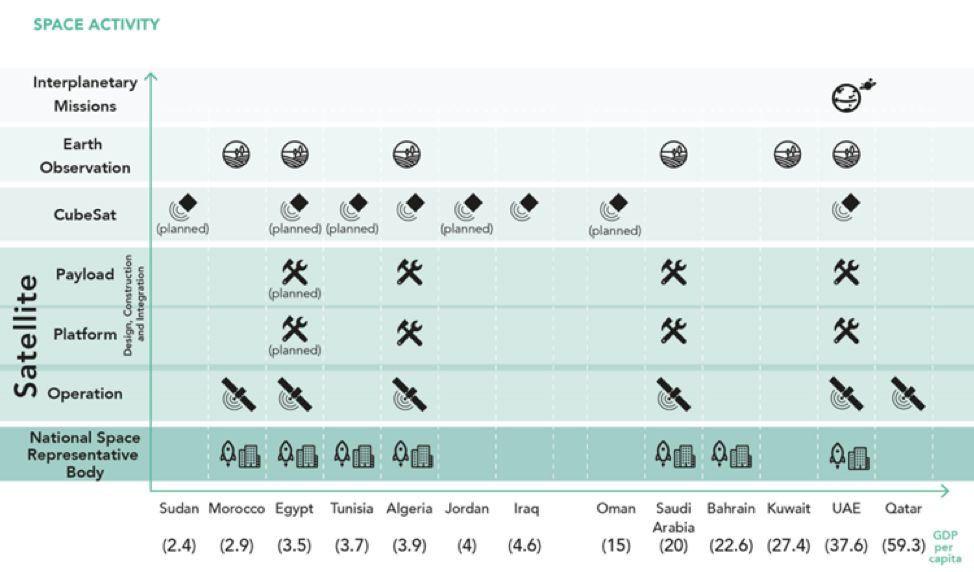 Many of the countries that went on to form ESA were already comfortable with the concept of European political and economic integration and cooperation prior to joining the agency. Conversely, within the Arab League, political fragmentation has significantly worsened in the intervening years since the 1976 creation of Arabsat, but nonetheless a precedent for a top down solution to cooperative space activity was set.

Satellites have been supplied to Arab League members by contractors belonging to various foreign powers with extensive collaboration programmes involving the training of indigenous staff, the construction of assembly facilities, as well as the provision of finance. Alliances will be particularly challenged under these circumstances. Undoubtedly contractual terms will have been agreed that will act to limit commercial relationships with other Arab League countries, particularly in view of International Traffic in Arms Regulations (ITAR) and other legislation designed to prevent the spread of dual-use technologies.

From both a practical and theoretical perspective the establishment of trust is a foundation to a successful alliance. Saudi Arabia and the UAE are likely to remain more open to cooperative space activities given their membership of the Gulf Cooperation Council (GCC), their regional closeness, ruling family structure, common security challenges, and economic positioning at the top of the Arab League.

Similarly, where there are contrasting positions on the space experience curve, the existence of asymmetric knowledge will represent a significant challenge to alliance stability. Of all the members of the Arab League, it is Algeria, Saudi Arabia, and the UAE that have made similar considerable investments in advanced space programmes that can construct large-size class satellites; and whilst Algeria is not a member of the GCC and so lacks the organisation’s political and military interconnections, the nation’s considerable space sophistication provides for its inclusion.

However, the presence of different foreign partners within each of these country’s space programmes make sharing knowledge and experience more difficult, but by no means impossible if specialisation were to occur. Specialisation provides for a managed reduction in the risk of technology giveaway, whilst allowing for the existing supplier relationships to be upheld.

All three countries thus stand to reap the benefits of cost sharing through the formation of joint ventures and the practice of specialisation; and whilst the UAE’s more diversified economy and the national pride in their Hope Mars Mission is likely to affect their disposition, the cost of such a programme is likely to have been prohibitive.

The agreements reached within this nucleus of space-experienced nations may thus coalesce into a more formal and structured organisation that others may join over time under established terms; mimicking the origins of ESA. Such a body would be faced with the varying levels of space industrialisation and national wealth amongst the Arab League membership, but in its time ESA faced similar trials and continues to do so.

It should be recalled that the origins of ESA stretch back some 40 years and therefore the improvement in the space industrial sophistication of Arab League nations should be seen in this contextual time frame. Some European nations have successfully built a space industrial base from very modest beginnings under the ESA Juste Retour principle of awarding contracts, and the question remains as to whether such an approach might work within the Arab League.

Nonetheless there exist spheres for cooperation even in the near-term with the interpretation of remote sensing data and the development of CubeSats. There have already been precedents for the sharing of imagery with Algeria’s contribution to the Disaster Monitoring Constellation (DMC) as well as the UAE’s involvement with the PanGeo alliance. It would seem that there has been plenty of satellite image sharing going on, just simply not between the members of the Arab League.

CubeSat programmes can be setup relatively easily and whilst an experience curve exists, it is unlikely to be as steep compared to that of the construction of larger-size class satellites. Their components are for the most part commercially available and less likely to attract dual-usage concerns and export restrictions. Finally, their design and construction are mostly likely to be undertaken by academic institutions which may be more willing and more used to the principles of sharing information and the development of cooperative networks.

The power of such cooperative CubeSat programmes can be significantly enhanced by establishing cross relationships with those Arab League nations that possess expertise in Earth Observation (EO), while turning their sensors and capabilities to specifically address regional problems. Arab satellites solve Arab issues and the Arab League can leverage this progress within its membership by encouraging and coordinating CubeSat solutions to transnational environmental concerns. The political will that originally established Arabsat to provide telecommunication services to the Arab world must be rediscovered.

Perhaps the most likely source for the championing of Arab League space cooperation lies with nongovernmental actors from academic institutions, transnational scientific bodies, and the private sector. The private sector possesses the ability to shape government policy with new space entrepreneurs forming the networks necessary to achieve their commercial goals; and in time these are being mirrored at governmental levels. Numerous informal relationships may gradually coalesce into more formal structures; particularly if they are encouraged to do so by the presence of intergovernmental cooperation reinforced by Arab League leadership.

The UAE has been particularly successful in attracting high technology starts ups with it advantageous tax regime, government incentives, and entrepreneurial critical mass. Both Abu Dhabi and Saudi Arabia have an involvement with the private sector space effort through investments in Sir Richard Branson’s Virgin Galactic. This raises the interesting possibility that Saudi Arabia and the UAE have in effect already started down the road of cooperation through the creation of an alliance that secures their access to future satellite launch services.

Finally, from a policy and economic-efficiency perspective, NASA and ESA as well as other international examples have all demonstrated the advantages of a national space representative body. The formation of such a body creates a single point of contact to coordinate and motivate the development of domestic space technologies; it can represent a champion to government and provide the reasoned cost-benefit arguments for space project budgetary allocation against a backdrop of other priorities. Equally it is this body that will be most capable of representing a country’s interests at the level of international cooperative organisations, in order to establish space protocols and become involved with major multi-partner space projects. The remaining Arab League members that do not possess such an independent body should consider forming one.

To conclude, the Middle East and North African (MENA) region is at critical crossroads in its social and economic development. Many of the region’s economies remain heavily dependent on exporting oil and gas; yet with price volatility in these commodities showing no end, national budgets have been placed under strain at a time when the expectations of a growing, youth-orientated population are higher than ever.

The development of high technology industry both stimulates growth, while creating and absorbing the skills of human capital. Space projects invoke national pride and self-confidence; people are inspired to see beyond their immediate concerns and hope for better times. EO from space provides the means to identify and challenge sources of environmental change.

It is at this time that a common structured approach is needed most, and while space in and of itself cannot resolve these fundamental issues, it can nonetheless help point the way.

Dr. Vasilis Zervos is a faculty member at the International Space University (ISU) and the University of Strasbourg in Strasbourg, France.

Mr. Christopher Gorham is a member of the International Space University (ISU) in Strasbourg, France.