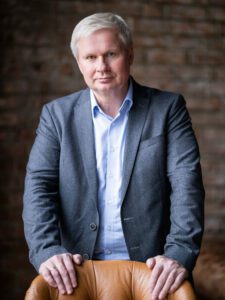 Elina Morozova in conversation with Igor Porokhin, a Russian attorney-at-law and partner of law firm InSpace Consulting known for having provided legal support for contracts for flights to the International Space Station of astronauts from NASA, ESA, Brazil, South Korea, Malaysia, as well as space tourists on board the Russian manned Soyuz spacecraft.

For the last 25 years, Igor Porokhin has been involved in major international space and telecommunications projects and industry dispute resolution. His track record includes working on a contract with Dennis Tito, the first ever space tourist. Another outstanding experience is Mr. Porokhin’s work as a member of the committee of governmental experts under the auspices of the International Institute for the Unification of Private Law (UNIDROIT) on the drafting of the Protocol to the Convention on International Interests in Mobile Equipment on Matters specific to Space Assets. Igor Porokhin acted as a speaker of the official delegation of the Russian Federation to the Berlin Diplomatic Conference on the adoption of this Protocol in 2012.

International space law is a relatively young, yet quite advanced branch of international law, which is currently in the process of its further development. What do you think comes first: the demands of practice that need to be adequately regulated or the law-making that is aimed at foreseeing any possible situations? Are space lawyers in demand currently or should young professionals opt for some other legal areas? Is it correct to talk about the emerging branch of ‘private’ international space law?

The process of developing international space law is a complex one. What real practice requires and what law-makers have in mind based on theoretical elaborations are closely related, yet practice does play a more important role. Still, there are cases where legislation and international norms are drafted in advance of relevant activities. A perfect example is the exploration, exploitation and utilization of space resources. This activity has not yet begun to be carried out in practice and will not begin in the near future, but several states already have laws regulating relevant legal aspects.

As for the current labour market situation in the sphere of space law, it has many dimensions. On the one hand, there is a shortage of young professionals in this field. This is partially due to the lack of adoption of new international space treaties in the sphere, which is somewhat balanced by the development of soft law. On the other hand, there is a demand within numerous space companies that need young progressively-thinking lawyers, which can further be stimulated by the advancement of the private space sector. Clearly, the more private sector companies enter the market, the more jobs there will be.

Finally, when it comes to private international space law, it is perhaps premature to classify it as an independent branch of international law. In any case, at best, it is currently in a nascent state.

Why is space tourism again in the focus of attention of the widest audience, from large investors to the academia? Who can rightfully be called space tourists and what makes them different from astronauts? Is there a need for specific legal norms, perhaps on an international level, to protect the lives of those who are sent on a space trip? Is space tourism, which is accessible to few people, ethical in terms of the status of space exploration and use as the province of all humankind?

The relevance of space tourism is supported by the news about the flights of Blue Origin and Virgin Galactic, which gives impetus to the entire field of space tourism and demonstrates an interesting example of competition based, among other things, on legal aspects. In this case, the issue of the delimitation of air and outer space gets an obvious commercial effect, as this is more advantageous to market flights into outer space than suborbital trips.

In the next 10-15 years, space tourism may follow the path once taken by civil aviation. Starting from an extremely limited market, accessible only to wealthy people, it may become an indispensable feature of modern life. Among different models of space tourism, from short flights to 80-100 km above the Earth’s surface that is an unofficial boundary between the airspace and outer space to full-fledged space trips to space stations, suborbital flights are definitely the future for the mass market. Visiting space stations is unique and sought after, yet the most challenging. For now, due to extremely high cost, it is hardly possible for private companies to deploy a fully commercial space station project on their own without state support.

As for the legal approach to determining the status of an astronaut and a space tourist, there are no differences when it comes to states and their international obligations. In accordance with the 1967 Rescue and Return Agreement, states do not distinguish between astronauts and other personnel of a spacecraft, including tourists, the rescue of which is the primary obligation of states. So there is no legal issue here.

Now, as for the ethical dilemmas raised when formulating the conditions for sending space tourists on a trip, such conditions are generally drafted in such a way as to release commercial operators providing space tourism services from possible liability. Such unfavourable conditions for tourists seem necessary to stimulate the commercial development of this sphere of space activity. The obligation of space tourists to assume such risks and to waive claims to commercial operators and licensing states has already found its legal basis in the legislation of some countries, such as the United States and France.

Could you share your experience of working on the Berlin Protocol to the Cape Town Convention? Why did it take so long for this document to come out and why, in the end, has it not gained the necessary number of ratifications and has not entered into force yet? Did participation of the private sector somehow affect the working process on the Protocol and its outcomes?

The work on the Protocol did indeed take much time, that is more than 11 years. The main reason for such a long work was a conflict of interests. On the one side, there were states that exercised jurisdiction over registered space objects, and, on the other side, there were private companies that, in the interests of commercial development, wanted to be endowed with certain powers that conflicted with the aforementioned sovereign powers of states. An example is the issue of unconditional transfer of licenses, frequency and other rights to creditors in the case of debtors’ default, which, at the early stage of work on the Protocol, was promoted by the working group reflecting the interests of major international satellite operators. Another instance is a mandatory requirement to transfer command and control codes of spacecraft to escrow agent with the right of a creditor to gain an access to them in the case of a debtor’s default.

As a kind of reaction to such a disproportionality, a committee of governmental experts was formed, which, in fact, began work on the Protocol anew. When the Protocol was changed in such a way as to meet the expectations of governments and achieve a balance between the interests of various stakeholders, it ceased to be of interest to major international satellite operators. Participation of the private sector in the work on the Protocol helped to find a necessary balance and create a potentially viable legal instrument, yet it was also one of the factors of its failure.

The diplomatic conference, which was supposed to somehow change the situation for the better, in fact came to an impasse due to the rejection of the Protocol by a number of States.

It is unlikely that the Protocol will soon come into force with its only 4 signatures, while 10 ratifications are needed. Nevertheless, commercial space activities and their skyrocketing development is what we have to face. That is why lawyers have no other choice but to continue developing space law, always striving for an ideal balance between public and private interests.

This Space Cafè Russia, held on 3 September 2021, was hosted by Elina Morozova, Executive Director of the Intersputnik International Organization of Space Communications and a friend of SpaceWatch.Global.

To listen to Igor Porokhin’s insights on sending tourists in space and the story of drafting, negotiating and adopting the ‘balanced’ Berlin Protocol, you can watch the full programme in the Russian language here: